Year of the Fire Monkey

Celebrating the Year of the Fire Monkey 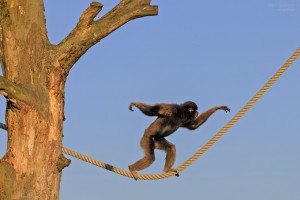 In China, the New Year is celebrated for several weeks starting on New Year’s Eve. Families take a week off from work and school to travel in order to spend quality time with their loved ones. Married couples will often be seen handing red envelopes with money to unmarried people, especially children. Chinese people will also wear lots of red around the New Year, as this color is considered good luck and helps ward off evil spirits. Along with spending quality time with family comes good food. Some foods traditionally eaten by the Chinese on New Year’s Day symbolize good fortune and longevity. Some of these traditional foods include dumplings, oranges, tangerines, congee, whole fish and long noodles.

The Chinese New Year celebration always begins on the 2nd new moon after the shortest day of the year, the winter solstice. Since the Chinese use a lunisolar calendar, the first day of spring and the New Year can vary from year to year. The start of the seasons in China is based on the location of the sun, so they are much less variable, and spring almost always starts on February 4th or February 5th. The 2nd new moon date varies considerably, and this is why the Chinese New Year can fall anywhere between the middle of January and the middle of February.

For 2016, the 2nd new moon after the winter solstice falls on February 8th, making this the official start date for the Year of the Fire Monkey. The Chinese zodiac has 12 animal signs that are continuously cycled through from year to year. Right now we are at the end of the year of the 8th sign of the zodiac, the Sheep. We are now in transition to the 9th sign of the zodiac, the Monkey. Each of these animals is also associated with a particular time of day, days of the month and one of the twelve months, but this level of detail is only significant when talking about an individual’s astrological chart. Let’s take a deeper look into the symbolism of the Monkey.

Out of all of the 12 animals of the zodiac, the Monkey is the one that actually has the most association with human beings. First off, they have opposable thumbs like humans. This means that they are able to use their hands in ways that humans can in order to grip things. They have the unique ability to use tools like humans. Thus, the Chinese associate this sign with being able to do intricate work with their hands, such as making jewelry, watches and construction of other elaborate engineering feats such as building bridges. As we know, engineers are usually smart people. This leads us to a second trait that humans have in common with monkeys more so than the other signs of the zodiac- intellect.

The intellectual capacity of Monkey type personalities allows them not only to be good at professions like engineering, but also professions that require quick, deep thinking, the ability to articulate ideas and outwit others, such as lawyers do. The combination of the intellectual capacity and the ability to use tools with precision also makes Monkey individuals potentially good candidates to become surgeons.

However, because Monkeys are usually quick-witted, clever intellectuals, they can also be quite guile. The cunning nature of a Monkey means that they are capable of becoming quite mischievous at times. Sometimes in a playful way, other times in a hurtful way. While Monkey people are quite capable of succeeding at whatever they put their mind to, sometimes their ego can lead to a lack of respect for others. Their competitive drive can sometimes lead to this self-centeredness that leads to lack of compassion for those around them.

The Fire Monkey is especially driven to succeed compared to the other 4 types of Monkeys. They are the most egotistical, driven to succeed, suspicious, stubborn and jealous. On the positive side, the Fire Monkey has great drive and a competitive nature, strong willpower, vivid imagination, potential to be a great leader and immense energy and creativity. If you were born in 1956, you are a Fire Monkey!